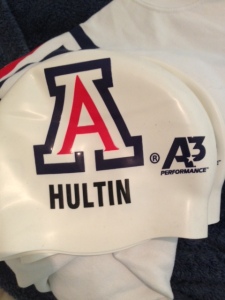 When my oldest daughter, Shannyn, was just a few months old, I remember placing her in the little baby seat that helped keep her safe and propped up in the tub and watching her gleefully splash at the water around her. As a toddler, she liked to stand in the bathtub, fill up a bucket with water and pour it over her head. It was clear that she loved the water and as it turned out, the water loved her back. For nearly 17 years, “swimmer” is a word that has largely defined her, so last Saturday was a somewhat remarkable day. Last Saturday, she hung up her cap and goggles for good and Sunday, she officially became a retired swimmer. 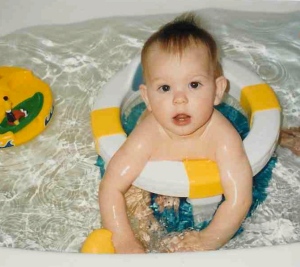 Living in California, near the ocean and with plenty of pools in our neighborhood, we knew water safety was of utmost importance, so at the tender age of 18 months, we took Shannyn to a local swim school for lessons. When she had mastered all four strokes by the age of five and still didn’t want to leave the pool, we signed her up for the swim school’s novice team.  At eight, the swim school told us it might be time to move her to a competitive swim club, as she was getting a bit fast for the novice meets. She was reluctant to move and leave the comfort of the school and many of her friends. She had always been a cautious child, slow to warm up to new situations. We waited a year, until she decided she was ready to take the plunge (sorry, pun-intended). Nearly ten crazy, grueling, exciting, emotionally exhausting and heart-wrenching years later, Shannyn graduated from high school and her competitive swim team, Conejo Simi Swim Club, and accepted a NCAA Division 1 swim scholarship to the University of Arizona. 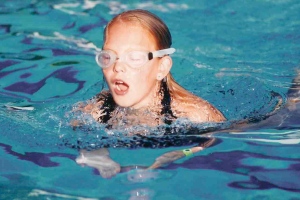 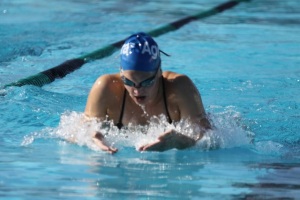 And Saturday, nearly four years later, we watched our Wildcat swim her last race. I am trying to find the words to describe what this journey has been like as a parent. I know for Shannyn, despite the hard work, the struggles, the commitment, the sacrifices and the disappointments, swimming has been one of the best things in her life.  For a long time, it WAS her life. Swimming has taught her so many critical lessons. Those who have never participated in athletics nor have had their children participate, often don’t understand the value, the challenges or the rewards of being a student-athlete. I remember a relative once asked me why Shannyn would commit all of this time and energy to a college sport if she had no interest in becoming a swim coach! In retrospect, this is the sort of thing you’d expect from someone who has no knowledge of, or appreciation for athletics. At the time, I just remember being a bit stunned, then defensive. Now, with the benefit of hindsight, I can answer that question quite easily:

Knowing that Shannyn was accumulating all of these wonderful benefits was useful because the swim parent experience has been an intense roller coaster ride. As parents, sometimes we want so badly to fix things for our children and in sports, you quickly learn you can fix almost nothing – your children have to own their athletic career and there is little you can do for them. But you also learn that this is ok. Even good. You see them struggle, you see them fail, you see them want something so badly, but often, not achieve it. You experience heartache and disappointment right along with them. Of course, you also experience moments of glory. You see them win. You see them succeed. You seem them set a goal and miraculously, reach it. You share your joy with the other parents because they know how hard your kids have worked for what they desire. And in either failure or success, you cheer them on. You are, forever and always, their biggest fan. I will never regret a moment that I spent driving to a pool early in the morning or late at night, sitting in a timing chair, running up and down a pool deck, washing towels upon towels, traveling to meets in far-away locations, spending too much money on expensive suits, getting more sunburns than I should have watching race upon race. I treasure the conversations in hotel rooms and cars, the moments of pure bliss watching a hand touch the wall, and even the times my heart broke a little – all lessons learned and put to good use. I will especially treasure the many friends made along the way: the other swim parents, the coaches, my daughter’s wonderful teammates. It has been one hell of a ride for our entire family.

People have asked me what our proudest moment was. When Shannyn first stood on a podium with a first place medal around her neck? When she made it to the 2012 Olympic Trials? When she was offered the spot at Arizona? When she earned her first Division 1 NCAA cut? These were all proud moments, to be sure, and represented hours of hard work and untold laps in the pool for Shannyn. But the proudest moment (or, really, set of moments) was watching her stick with the sport, even when times were not good. As one swim parent wisely told me years ago, “It’s easy to love swimming when you’re swimming fast”. Two years in high school spent on a plateau, without dropping any time in her best events, wondering if she would ever excel again, watching her fifth club coach in as many years leave, watching school friends enjoying their comparatively full social lives, Shannyn thought about quitting more than once. Admittedly, I had sometimes wished she would. It surely would have been the easier route. Instead, she continued to slog through nine practices a week, including three morning practices that began at 4:45am (and required a half hour drive to reach), before heading to a full day of school, homework and yet another two-to-three hour practice in the evening. She eventually broke through and achieved her dream of swimming on a top Division 1 college team. 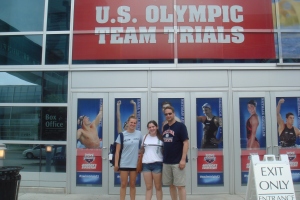 It’s the end of an era for Shannyn and for our entire family. Life without the identity of “swimmer” will be different, to be sure, but I have no doubt that the lessons learned have prepared her for whatever lies ahead. As with many athletes (and having changed her major twice), she will take an extra semester or two to graduate, to assimilate and transition into life as a “swammer”.

Although it’s the end of Shannyn’s swimming career, it is the beginning of the rest of her life and I know that while she will miss swimming, she is ready to move on. Truth be told, I will probably miss it more, but as fate would have it, our younger daughter, Claire, decided a few years back that she wanted to jump on the roller coaster, too, and is now determined to swim in college. So the journey of swimming is not quite over for all of us yet. Like her sister, Claire has already seen success and failure. She wants to be part of something bigger than herself and learn what it means to be a student-athlete. Despite the trying times and the sacrifice, I can’t think of a better path for her to take. 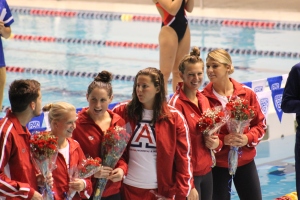 And to Shannyn, I can only say: congratulations on reaching the end of your incredible swimming journey. In or out of the pool, I will always be your biggest cheerleader, your most stalwart supporter, your most ardent fan.

8 thoughts on “The End of the Lane: A Swim Mom’s Reflections”